So What Happened to Video Rich Snippets?

So What Happened to Video Rich Snippets?

… and why video sitemaps are still important?

Up until July of this year, if you diligently applied all the principles of good video SEO in managing your online video, it was highly likely that Google  would reward you with lots of eye catching video rich snippets. Video Rich Snippets looked like this:

But alas, some time around the middle of July (2014) –  for all but the very biggest players, such as YouTube, The Guardian, Vimeo – those irresistible video rich snippets disappeared.

Well, research showed that video rich snippet images are very tempting to users and attract a higher click through rate than standard search results. For this reason, they were worth pursuing.

Why have Google done this?

A couple of possible reasons for this big reduction in video rich snippets springs to mind.

The most cynical heavy-handed possibility would be simply that Google want to drive more traffic to YouTube – to the detriment of almost all other web video.  Google owns YouTube and YouTube makes money from advertising. Were video rich snippets, just too good at driving traffic to other websites?

A push on vertical search for video?

On the other hand, it could be that Google have decided to push the dedicated ‘video’ search tab? This move would make sense.

There was a time when only sophisticated users looked to the ‘Image’ search tab in Google, but now most people use this when they are clear they would like to see an image. Do Google want the ‘Video’ search tab to be used in the same way?

You could argue that rather than video rich snippets being scattered through general Web results, keeping video thumbnails under the Video tab creates a cleaner, less cluttered experience for users. Here’s a comparison of the two: 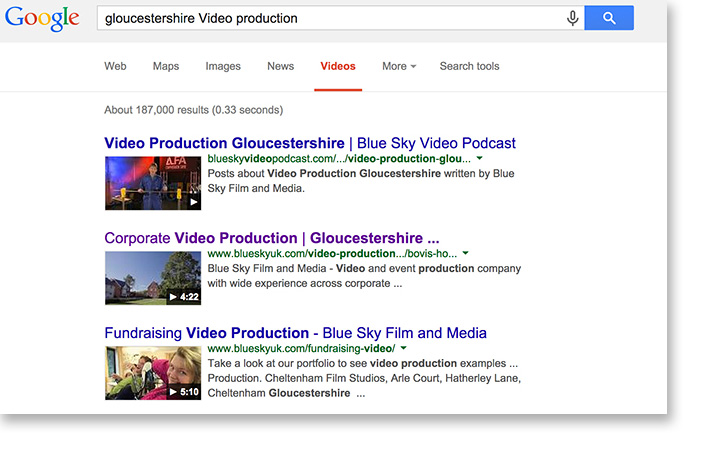 We’ve also noticed that the video tab has been more frequently visible recently. Previously, it was often buried under the ‘More’ tab.

This increase in the appearance of the video tab is particularly evident where the search topic lends itself well to illustration through the moving image. For example the terms, gymnastics, restaurant, sailing and washing machine reliably trigger the video menu. On the other hand, we found that terms like accountant, insurance and tax don’t!

Another pattern we’ve noticed is that city searches tend to get you a video tab, while town searches don’t. I guess not a lot happens in most towns and a still image will do.

At this stage there is no way of knowing, whether Google has drastically reduced the occurrence of video rich snippets for good, or whether this is just one of the many temporary experiments, that Google throws up from time to time. Their Google Webmaster Tools Video Channel has been noticeably silent on the topic so far.

So should I still bother with video sitemaps?

Yes – definitely. Don’t stop submitting your video sitemaps and doing all your video SEO routines. There are several reasons why this is still important.

You can learn more about video SEO tactics at the next Blue Sky video marketing seminar. See sidebar for details.